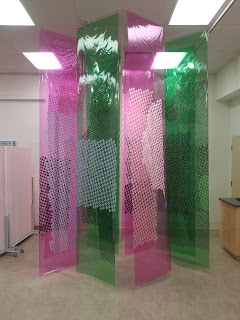 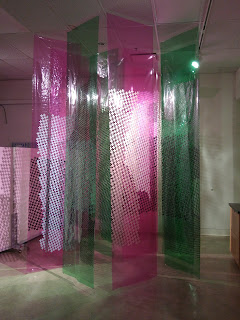 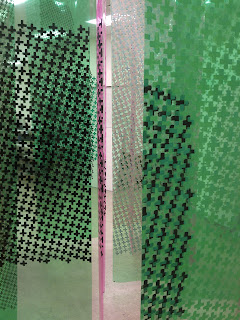 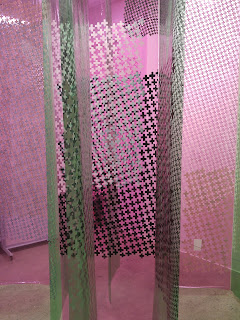 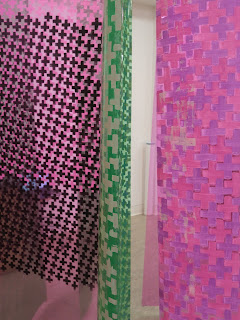 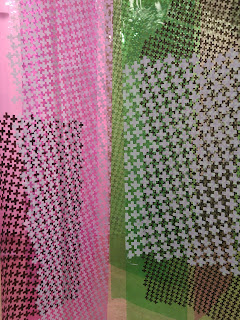 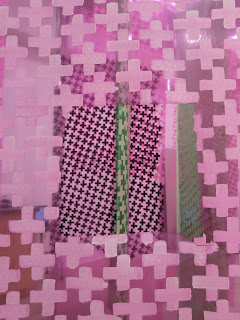 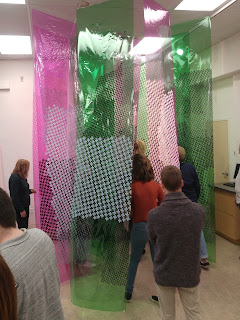 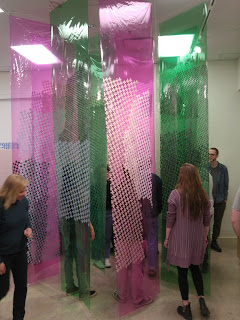 For my last project for this term, I wanted to make a site-specific work. I was planning to intervene in my studio space in the VA Building with a cellophane installation using the "+" pattern I had used in an earlier piece. I feel this was a good choice because it was less directional than the other patterns I have used. I wanted to limit the colour of the cellophane grounds to magenta and green because I love the way those two hues cancel each other out when they overlap; they produce a purplish grey tone.
However, as the work developed, an art intervention in a space where I make things and is usually filled with art already, didn't make much sense; there wasn't much of a contextual contrast. I was also struggling with the question "why is it on the wall?" I didn't really have a good enough answer. I think because I'm a painter, the wall makes me feel comfortable. All the more reason to bring it right off the wall and see what happens; going beyond my comfort zones.
What happened was that space became a volume. Instead of delineating space with a cellophane membrane, the membrane became the space. It was a weightless kind of space filled with a mist or a field of snow or something. This was one way of having my viewers interact on a more intimate level with the marks. You are enticed to interact with the installation and are forced to deal with the marks which seem to hover in mid-air at some points and overlap illogically in others. You are encouraged to explore the work as you make your way through it because you are lead by areas where the patterns flow from one sheet of cellophane to the next and try to pick up where the pattern left off. I deny that continuity in some areas and also break that continuity with blank and cut out areas (which almost act as viewing holes). I think this allows for an engaging and rich phenomenological experience.
It also allowed me to speak to the fact that the act of looking is not limited to our eyes but also involves our bodies. How we move through space changes what we are seeing. It's not something that we really consider so I thought it was important to bring that out in the work.
Some of the critiques were that now that it's off the wall the distortion of depth perception isn't as strong. Also that the painted aspect still isn't that important in reading the work. Those are things that are inevitably sacrificed when a picture place is brought out into real space and point to aspects that I either reinforce or let go in the work.
So we'll see where this work takes me. I have some other ideas that I'd like to try over the summer break (maybe not as ambitious haha) and we'll be ready to go next September :D
Posted by peet at 7:34 PM