Landsape and New Horizons. Kind of a flowery title of our 3rd project for my Intro to Photography and Video class. The operative word here is "wonder" and yesterday afternoon was perhaps one of the most energizing lecture/studios that I've ever had. Our project in to createa 1 to 2 minute video on the subject of landscape keeping in mind the ideas about "what makes it art" that we've learned so far. It's basically an exploration into our relationship with landscape or space or frame of reference (or what have you) through the medium of video ie: moving photography.
One way to do that is to break down the language of making video: emphasizing the concepts of shooting ie, pan, zoom, pull focus etc. The idea of montage comes into play here too. A sequential series of images can only be done when you have "time" as part of your medium (i guess they can be done in other mediums . . . but like a Greek frieze, it elicits associations like "that could be a video" because video and TV are ubiquitous . . . we understand the language of  moving images very intimately).
Mark Lewis is one of the artists that we examined closely and who's work I feel has really opened up the possibilities of video to me. "Algonquin Park" can be compared to a painting by Mark Rothko. It is deliberately slow, minimal, full of ambiguity because the artist wants us to cut through the white noise of our everyday life (as evidenced by a question by the prof "How many of you stopped watching half-way through"). I think this type of approach speaks directly to me not only because I'm a painter, but I also have a bone to pick with contemporary pop-culture: its glitz, ADD, shallowness, consume, go go go etc. I believe in finding "those pockets of stillness" that makes us feel like human beings.
Okay okay, a little on the transcendental side of things, but there's nothing wrong with a little meditation ;)
Mark Lewis

Posted by Pete Kohut at 7:50 PM No comments:

One night with video

First foray into video . . . having problems with the sound on my computer . . . but I'll make sound effects if I have too lol

Records are fun! Perusing through the stacks of records is great cuz you see albums by bands that you may have forgotten about or ones you've always meant to check out but never have. I bought a copy of "Bug" by Dinosaur Jr. (for a reasonable price mind you) because it was one of my favourite albums! I'd listen to the album on my older brother's stereo cuz I had the fancy new compact disc player (with dual casette deck yeah!). I didn't buy much vinyl cuz I would have to beg my brother to take a break from his existential malaise (whilst listening to Morrissey . . . oh those white middle class suburban blues!) so I could borrow his stereo long enough to tape a record to casette . . . and of course it would skip so i'd have to redo it. Last year I bought a made-to-look vintage record player with casette deck, cd player, radio (!), and auxiliary line out (to say an ipod or computer) and have since started to slowly build up a collection! (much thanks to the Magoochie for the Al Green loaners <3) The thing I forgot about is that you have to change the record over every 20 minutes or so instead of having the itunes playlist go for hours . . . potentially days! But it makes me think of a time when I would actively listen to albums . . . just sitting/lying/chillin'/illin' and engaging with the music. I only do that now to a limited degree whilst painting or in transit to work or the university or whatever. 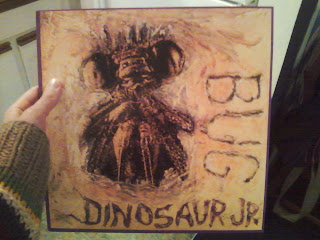 
In this series of self-portraits, I wanted to capture a sense of time and space. With photography, its relatively easy to capture slivers of time (1/25 of a second etc.) but while I was exploring the idea of the multiple exposure, I stumbled onto the act of capturing motion. I looked at the work of Marey and Janieta Eyre for inspiration and was intrigued by combining multiple exposures into one frame to create something previously unseen (kind of like how I paint . . . intuitive and responding to the work as it unfolds, only more controlled because the parameters are set-up for "planned accidents"). I didn't just want a sequence of a motion (like in a skateboard magazine) but something that created an impossible time/space. The motion is a repetitive motion: the same act repeated and rephotographed (as opposed to one sequence of multiple shutter snaps like Marey).
The Interior scene was the baseline but even then there is some fudging of the motion (or emphasis if you will) because the act of juggling the brush caused my hand to blur. So I slowed it down for the sake of the shoot. The idea of performance comes into play here but it kind of hard to avoid when you set up a scene (and consider what to wear, what to include in the shot etc). I also erased some pieces of the various exposures to create and impossible (or at the very least improbable) figure. This simultaneity of space added to the ambiguousness of the scene.
The Exterior scene on the beach took the baseline idea further by adding a "second me" (with hoodie = my evil twin lol). What is created is an impossible scene of me repeatedly throwing stones into the ocean with an added dimension: the two me's begin to interact even though I wasn't physically present in two places at once (I don't have the technology yet :) made obvious by the change of clothing and the inclusion of shadows casts on the beach.
The Night scene took the baseline idea except backwards: it's one shot with an emphasized action (pause to allow more of the light to reflect into the shutter) that's repeated (taking steps). It is more akin to Marey but it differs because it is a performance . . . the false act of walking slow enough and pausing for the camera and not capturing/studying a "real" action.
I think the result of this project is a good segue to video art for next week :D
Posted by Pete Kohut at 9:24 PM No comments:

Some fun with a slow shutter speed, wicked boss camera, and night-timey goodness. 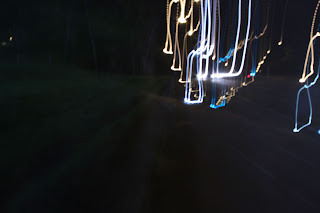 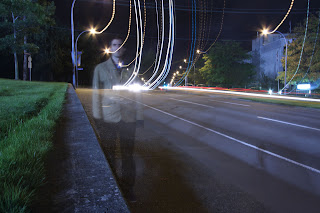 Posted by Pete Kohut at 9:29 PM No comments: 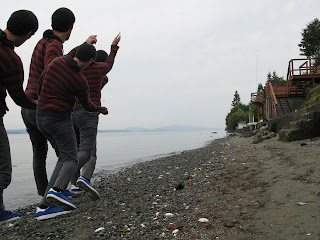 Posted by Pete Kohut at 7:47 PM No comments: