Lynda Gammon started her talk showing photographs of old studio spaces in Victoria where she lived and worked. I love seeing the interiors of those old warehouse/tenement buildings in Victoria's Chinatown. There's something romantic about seeing the rough timber siding and lopsided floors and window sills. And I always love seeing inside other artist's studios. I like seeing works in progress and you really get a sense of the person behind the work in how their workspaces are organized (or disorganized).
What's interesting about a photograph about an interior space, is that it talks about time as much as place. Photography is basically a medium of time (exposure time etc) and also says as much about the era in which the photo was taken (evidence in technology used . . . this was still analog) as much as the time in history of the particular space (ie. this photo was taken on February 29, at 6:05 am). Gammon (whose process is intuitive and relies heavily on the emphemeral) uses the medium in an interesting way: to express the rugged and rawness of these spaces, she uses polaroids (which are often badly exposed) and treats them with a certain disregard (like stepping on them) that they take on the character of the space. These photos later serve as source material for her later sculptural works.

"Salvaged" is a typical example of her sculptural works. Using the idea of the architectural model and assemblage technique, she intuitively creates a pseudo-model of a place that encapsulates several different layers of time and of place.
1st level of place: creating the installation in the gallery is done in such a way that it can never be created exactly the same if installed in another space.
2nd level of place: the sculpture represents a fabricated space (or model of a space)
3rd level of place: each image used illustrates a different space being photographed, so what you are seeing is an assemblage of spaces into a space, which then is viewed is a space.
1st level of time: the linear time in which the installation exists in real space (ie. length of the show)
2nd level of time: the ephemeral nature of the sculpture; the photographs are reused and shuffled around to be reused in other installations (past and future ?)
3rd level of time: the time depicted in the photographs (ie. the past)

Another interesting point that Gammon made was that photographic scale is very different from actual scale. You don't look at a tiny photo of a chair and say "that's a small chair". You recognize that image as a chair and don't consider the physical size represented by the photograph. I guess our brains assume that this image of "chair" is a symbol for a chair of regular size? Interesting.
Gammon's reference to architectural models reminds me of my time studying architecture and trying to hammer an equilateral triangle into a cube = disaster lol

Posted by Pete Kohut at 8:37 PM No comments: 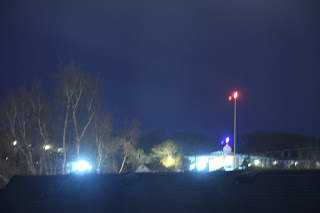 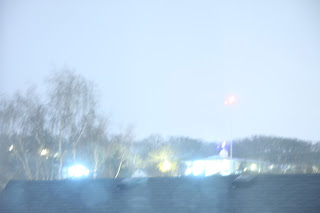 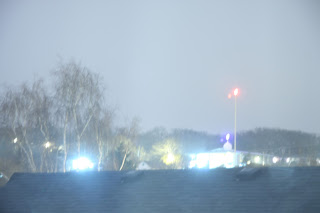 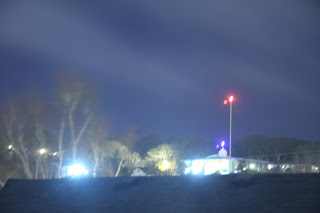 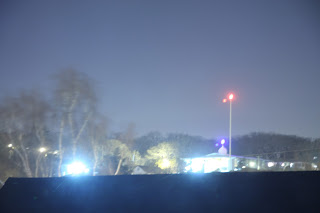 Posted by Pete Kohut at 7:52 PM No comments:

It was interesting to hear what an artist from Winnipeg had to say about the "Winter Capital of Canada" aka "Slurpee capital of Canada". She talked about the sound of snowplows doing their job out in the sub-40 degree temps in the middle of the night (which I had totally forgotten about . . . the low rumble of the tractor blade on frozen concrete, and revving of diesel engine).
I found Stillwell's work to be a bit on the adhoc side . . . but that's because her inspiration comes from the vernacular: stuff that's all around us ie. slurpee cups, tofu, peg board. It was interesting to see that approach when compared to the cerebral/conceptual method that most of the artist's we've had come talk to us have described.
I liked the fact that everyday objects were used. It creates a direct link to time (a ready-made object, specifically manufactured object, is directly linked to the time in which it was made) and also to place. You wouldn't find slurpee cups in India for example.
Stillwell also makes reference to the landscape (place) but picking out the different characteristics of rock in the various locales that she has made installations.
Repetition plays a big part in Stillwell's work. A kind of banal repetitiveness is needed to make her installations (peeling off graphics from slurpee cups, sifting gravel in strawberry baskets etc) which also makes reference to time.
I think it is hard to extract the notion of time when it comes to an artwork. Kind of like the idea that space and time are inextricably linked, an artwork (certainly a sculpture) exists in space and therefore assumes a temporal aspect. It makes me think of Matthew Ritchie and his work based on the concept of cosmic time: the totality of time as opposed to time as segmented, measured fractions. (I also enjoy how he bridges the gap between drawing, painting, and sculpture).

I have to say that I'm not a huge fan of performance art. Perhaps its the fact that you can't enjoy it silently by yourself that makes me keep it at arms length, but I do enjoy the idea of it: the body as medium. John G. Boehme gave his artist talk last week and I was intrigued by the notion of "transdisciplinary practice". This goes further than the artist working in several different media to create different things, this term means that multiple media make up the one project ie: a video of a performance, the performance itself, the result of the performance (sculpture, paintings, etc).
The piece that I liked was one where Boehme video tapes the act of hitting golf balls into a heroic-sized sheet of metal, in full regulation-golf attire. The resulting marks on the sheet metal quite interesting because on their seeming randomness. Boehme also leaves the golf balls where they lie and thereby transforming them into sculptural elements.
Golf sure is laden with meanings and strategies for making art . . . especially since it is extremely fetishized with its rules and strict regulations! A fun past-time lol

Went to see the best art exhibit that I've seen at the Art Gallery of Greater Victoria: Throw Down. It features this sculpture by Megan Dickie which I think is own of my favourites: a human-sized Canada Arts Council logo as punching bag. It has to do with Canadian artist's struggle with the grant system here in Canada and the connotations of whether or not you get a grant.

Daniel Laskarin: The Body is Thought

Daniel Laskarin gave our class a talk on Tuesday. I wasn't surprized to learn that Laskarin's work is highly conceptual in the vein of Minimalism, but I was intrigued by the rationale behind his works having seen an exhibit of his recently that left me baffled. Laskarin talks about the current context for art making: anything goes. But if anything goes, nothing goes as well . . . nothing is art? This leads to the contemporary preponderence of uncertainty in art: what is art? Is this art? Why is it art? etc. Laskarin combines these thoughts with a "knowing" of material (as when one picks up a brick and is instantly knowledgeable that it's a brick and has brick-like properties). This is where the notion of the body as thought comes into play. Contrary to Descartes idea that the mind is seperate from the body, one can "think" through their fingers: mind and body are one. Laskarin's desire is to activate the viewer as they experience his pieces in real space (sculpture).


One particular piece that I liked of his is called Forest for the Tree, 1991/2000. An upside-down tree is reflected through lens on the opposite wall using camera principles (camera lucida). This creates an optical forest and mimics the way images are cast on our retinas. A piece that makes the viewer question the act of seeing relates to the ideas of perception of reality and how we experience it. It's also a little un-nerving to be in a room with an upside-down tree . . . the "surreal" begins to creep in.
More about Daniel Laskarin's work.
Posted by Pete Kohut at 11:30 PM No comments: