Glimmer of an idea

What about creating a book that is unreadable, unusable, non-functional? Would it be made out of paper or would be it be some harmful material like rusty sheet metal? How would it be bound? What typeface would I use? What would the content be (is the content important in this case)? Format? Would there be a "cover"? Would it even be physical . . . or online? Or a projection? I like the repurposing of books into sculptures and what-not. But I want to actual create a "book" that doesn't serve a purpose.
Posted by Pete Kohut at 9:58 AM No comments:

Footage from the CoLABoration reception December 9th. :) It was packed! What a great show.
Posted by Pete Kohut at 1:24 PM No comments:

I wonder if this works in video?
I love capturing time in photography. Essentially, that's what photography is but I like to exaggerate it . . . time as a medium.
Or time as a theme/vehicle. (good ol' rgb:) 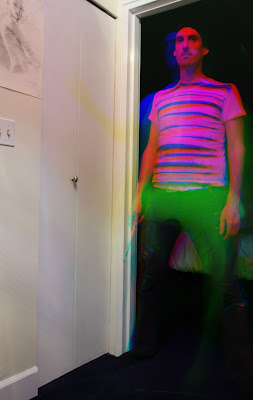 Posted by Pete Kohut at 8:54 PM No comments:


A sculptural exercise using post-consumerism as a theme. It is made out of the recordable parts of 5 1/4" floppy disks . . . a type of media that hasn't been used for about 10 years. Hard to believe that when I was in design school, you could fit a smallish sized assignment on one of these. Hehe, the image sizes of these image are greater than the combined space of all the discs used in this piece combined.
When I was thinking about this piece, I began with thoughts about dinosaurs and extinction. The idea of a proto-dinosaur (a bird-like thing) was very appealing but then I thought it might be too literal. I wanted to go further, more basic. I then thought about evoking a trylobyte (a prehistoric invertebrate found in the most ancient of sea-bed fossils). So I started working on the form and then found that the material isn't too flexible with shape etc so it morphed into a more bacterial-type tube worm thing. I thought this appropriate because of the presense of floppy disks in early personal computer set-ups: the foundation of "memory" in a sense (I remember carrying around a boot-up disk in first year university . . . 1993!) Which leads me to a danger with using this type of material: nostalgia factor. I tried to circumvent that by making the form not immediately recognizable.
Posted by Pete Kohut at 10:17 PM 3 comments:

These are some new figure paintings out of my studio (er . . . apartment lol). I've been enjoying this return to a more traditional mode of representing the figure because it grounds me in proportion, mass, and form. It's good for me to revisit "reality" after working in an abstract mode for awhile so I can remember what I'm abstracting. Chicken before the egg? Maybe :)
Posted by Pete Kohut at 8:16 PM No comments: