Here's the result of my final project for my photog and video class. The project is inspired by the video work of Mark Lewis. One aspect of his work is to circumvent the narrative of the video by drawing the viewers attention to the process of video. The viewer is then thrust into a purely visual experience. I did that by taping the camera onto the back dash of my car and did a series of left turns and rights turn, creating an "actual" loop. I'd love to do more video projects but I have to get a few more figure paintings done and I have an itch to make a sculpture (or two) over the holidays!

Posted by Pete Kohut at 8:17 PM No comments:

On Sunday November 27 from noon until 2:00 pm, Samuel Jan and I will be finishing our piece for the CoLABoration show at the Victoria Emerging Art Gallery. Opening reception for the show is Friday December 9th. Come check it out :)
Posted by Pete Kohut at 6:17 PM No comments:

Observations of Representation
It isn’t so much a concept that I wish to expand on based on the readings from Video Art by Michael Rush for the research paper for Assignment Four, but instead, it is the work of the artist Mark Lewis. It was in seeing some of his video projects (particularly Rush Hour, Morning andEvening, Cheapside (2005), AlgonquinPark, September (2001), and Mid dayMid summer, Corner of Yonge and Dundas (2010)) that “switched on the light” for me in terms of video art. I’ll analyze a few key themes in Lewis’s work by making referencing some of his projects and in doing so, find a direction that I can explore for this next and final project.
One theme that is central to Lewis’s work is demystifying the act of making video. He does this by emphasizing the language of the camera ie. zoom, pan, focus etc. and this allows the video to be free of the standard narrative sequence. “Therefore, by releasing filming syntax from having to tell a story, Lewis comes into contact with “painting”: and not because his works return to pictorial composition, or explicitly refer to figurative works, but because they convert filming into a basically figurative form of expression.” (Mark Lewis: The Concept of Limit of Frame, Saretto Cincinelli, p. 149). Without a narrative to distract a viewer’s attention, they are free to experience the piece on a different level. The video piece called  Rush Hour, Morning andEvening, Cheapside (2005) is a sequence shot with the camera upside down while moving along a busy sidewalk during morning rush hour. There is no story or context of what is happening, so we are forced to engage with what is on-screen. It takes a moment or two to figure out we are watching the now upright shadows of people walking: it is only when the actual pedestrian finds their way into the shot that we fully grasp what is happening. This allows us to get grounded visually before being launched back into the sequence.
The piece called AlgonquinPark, September (2001) takes a slightly different approach in breaking free from narrative by subverting it: a second theme of his work. A slow unfolding of a misty scene on a lake makes the viewer realize that there isn’t much going to happen in this piece. When a boat comes into the shot through the mist, the viewer might think this is the action of the video, but it stops short mid frame. What really is the subject of this piece is the mist. Once again, freed from the narrative, this piece takes on a painterly quality. The camera is less present in this piece, but it is in subverting the standard narrative structure of film that enables the viewer to absorb the piece in a purely visual sense. The lack of sound in this work also helps with that focus on visual aspect. “It can be very difficult to have a conversation (with a friend) in front of a work of art with sound, and, perhaps more importantly, it’s certainly difficult to have a kind of internal speech, literally a conversation with yourself when a work is bombarding you with external sound.” (Mark Lewis: An Unexpected Subversion, Cristiana Collu, p. 167).
The last piece I will examine is called Mid dayMid summer, Corner of Yonge and Dundas (2010). This piece deals with a third theme and that is the idea of using the language of the cinematic in a video art (non-narrative) context. What appears to be a non-descript shoot of a busy intersection becomes charged in a surreal sort of way because the video is running backwards. This technique takes the subject out of its normal forward-moving context and makes the viewer experience cars, people walking, and architectural space in a fresh, new way: we are watching time unfold backwards. The slightly slower pace of the action and fantastic lighting makes this look like it could be the starting montage to a quirky music video. Once again, there isn’t anything really “happening” in the work, so we are engaged with this piece visually.
Mark Lewis’s work is fascinating and has enabled me the tools I need to explore video art. In freeing video from narrative, the act of shooting video becomes an impetus to create and explore a whole body (if not lifetime) of work. As any interesting art does, it creates more questions than it answers: In what ways can the shooting of digital video differ from the more cinematic techniques that Lewis employs? In what other ways can the standard narrative be deconstructed and reconstructed? Will digital video become a separate facet in the context of contemporary art?
Posted by Pete Kohut at 11:31 PM No comments:

Mishaps in the daily life of an art student. 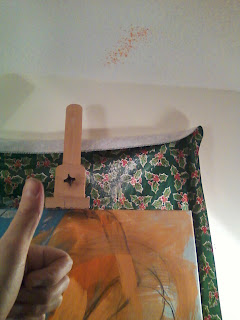 Posted by Pete Kohut at 7:26 PM No comments:


When thinking about landscape using video as a medium, the idea about creating time segments came up. I used loops of the jogger and car so that they would meet at a certain point and represent a fragment of "real time". The concept of "real time" is questioned using loops and a split screen to create an event that contains the same segment in time repeated, looped, sped up, cut, cropped, etc. But the shakey-cam aspect of it gives hints that the time sequence isn't in order so it's very ambiguous as to what happens first. Also, is it the same shot? Or is it different takes? I like that my assignments ask me more questions then I answer lol.
Making video art is so awesome! The only downsides are that time flys by when trying to figure how to do a certain function and that the footy from this last assignment is taking up 25% of my hard drive :D
Posted by Pete Kohut at 8:09 PM No comments: