I was updating my website and giving it a new layout when I realized that for my shows coming up this fall in and around Vancouver, I'm a little short on paintings from the coffee shop series from 2014. This is partly due to selling a few, damaging a few, and not wanting to transport the two really big canvases to the mainland (because they will also get damaged in the process . . . I'm sure of that). So I've decided to beef up the series and revisit the theme. I'll do some smaller ones that act more like footnotes to the series. It'll be a fun challenge too, because I remember that these were a struggle for me, but now they seem like child's play. I guess we'll see how it goes.
Here's some of my source sketches to make paintings from. 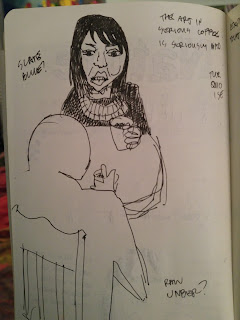 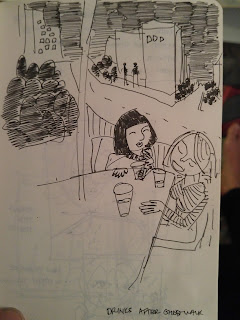 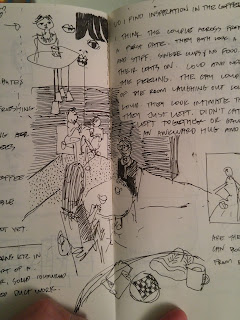 Here's the latest painting in my series of portraits. Well, not really portraits. More like using the face as a vehicle for paint on canvas. I also still need to give them titles . . .

It's taken me a little getting used to working in my apartment again. I was spoiled working in the painting studio at school where I could spread out, make a mess, and leave stuff where it was. I did manage to clean out enough space in my apartment so I could work on larger images. It's a good start.
I also find that I don't have the same urgency working at home. I wonder if that's because I feel that since I went all the way up to the school, that I really should get some decent work done. How do I get that same urgency at home? Perhaps a slow and steady boil will serve me better at home?
Anyhoo, here's some progress: 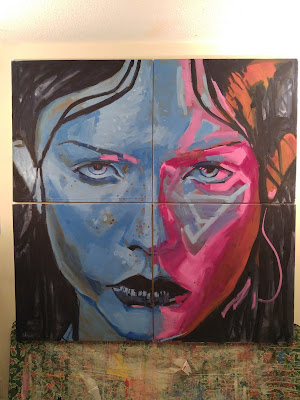 Finding words for the unwordly

Autopoiesis refers to a system capable of reproducing and maintaining itself. This phenomenon is an apt description of what contemporary is (to me) and refers to an essay by Barry Schwabsky in a monograph of Dana Schutz.

I approached the challenge of making a painting that refers to the outside world but simultaneously refers to itself by looking at portraiture, in the 1800s british sense of the tradition.

A critique of portraiture as self-aggrandisement of the sitter (and also painter) and commercial product.
What also draws me to portraiture is I'm interested in figuring out how other people look like. It's a challenge in itself to capture the likeness and personality of a face in paint on canvas. 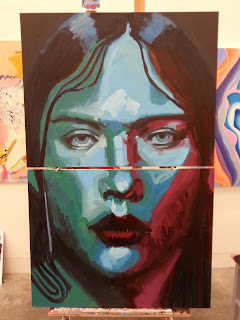 But . . .
I want to go beyond the image.
I want you to think of not only the process of making a painting but also to think about the nature of recognition.
I want you to consider what a "painting" is and what its function is in the contemporary visual landscape. 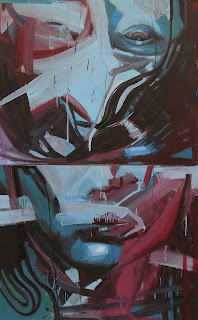 Here's a better image of the last painting I did for class this semester.
I don't have a title for this one yet. I'm excited about the direction this painting is pointing me.
I want to explore further the notion of making a painting that reads as a painting first, and then a portrait second. I like to do more using grids of square paintings at various sizes. I do enjoy the bigger painting's presence, but I'll have to clear out a piece of furniture or two if I want to do this in my apartment.
Next post I'll work out some kind of artist statement. This might help focus my direction for this series a little.
Posted by peet at 8:48 PM No comments: