The second anniversary of my mother's death just passed so I felt it was a good time to talk a little bit more about the series of drawings I did last semester that were about her. 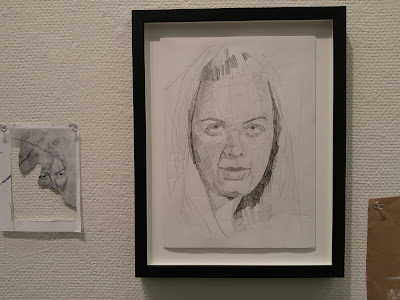 What I wanted to do was to create a large graphite drawing on paper (6 feet by 4 feet) using the various photographs and images of my mother that I had found around my apartment. I started doing small studies from the photographs (like above) and found myself getting very emotional. At some points just looking at her image overwhelmed me. Feelings of loss and sorrow. At times elation and a feeling of release. There was more repressed emotions then I had realized inside me about my mother's death. 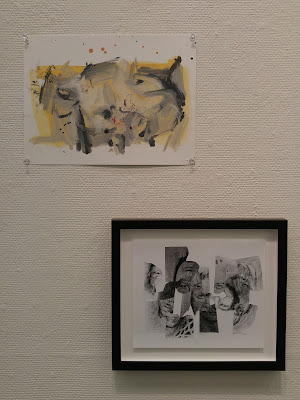 At other times I reminded myself that I had issues with my mother being controlling and found that it was good to let out this frustration. I had a chance to practice my new-found interest in collage by scanning a few of the studies, printing them out, and then pasting them together. I had decided that this would be the basis for the larger image. 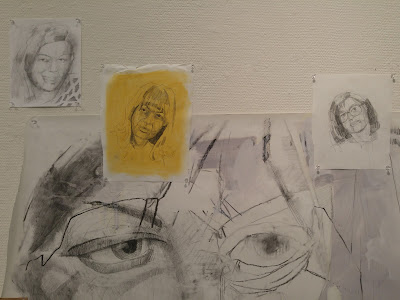 As I was coming to terms with the remembrance of my mother (still ongoing) I remembered that she was also a person; with virtues and failings like the rest of us. In coping with her death, I had built her up in my mind as a kind of saint. A natural response to losing a loved one.
As I worked on the piece and workshopped it with my prof and classmates, it struck them that the larger version of the collage was lacking a certain spark that the studies had. My prof suggested I continue to push the larger drawing by trying to take it beyond an enlarged study but also to incorporate the studies in the finished presentation. He said that what was most interesting about my work was the way in which I work through an image; the "final" product falling kind of flat. I thought that was particularly acute of him. I interpret that observation as a piece of art being open or closed. If it is open, it is open to interpretation by the viewer, it leads to other thoughts and feelings. A closed piece is to be read in a specific way and has an air of presentation about it. 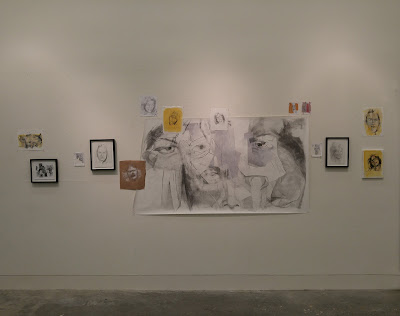 I learned a few valuable things last semester.
a) find a way to keep your art open
b) displays of skill are off-putting, show the struggle behind it (based on fellow student comments)
c) nothing is ever really "finished"

Which brings me to this thought: When we lose someone we love, we never really get over them. We just learn to live life without them.
Posted by peet at 9:42 PM