Results of wax and stones

I initially wanted to make a sculpture that would capture the sound of pebbles tumbling together as the waves wash them in and tow them out. I built a few prototypes and hit several dead-ends because it always lead to a situation where I would have the "reset" the sculpture, which is counter to the feeling of the piece. So I went down to the beach again and spent the evening "listening to the stones talk to each other" and decided to capture what makes the sound: the water rushing between them. I didn't just want to put some stones in a bucket of water and shake it, so I thought I could capture the negative space between the stone using wax.
I think this suits the concept quite well. Wax is such an interesting medium to use because it quickly shifts between liquid and solid when fire or heat is applied to it. It's great for capturing gravity and flow as it drips and hardens.
I created a type of mold with a cake tray and some select stones and poured melted candle wax into it. I felt more like a mad scientist than an artist as I was melting candles in glass jars on my stove-top. I left it to dry overnight and then melted out the stones using a candle and heated palette knives. As I was burning out the stones, interesting marks were left behind creating an interesting history to the piece. I made three of them but there's no significance to the number . . . that's all I really had time for (probably an excuse that won't fly). I decided to keep the wax white and off white because otherwise it looked too artificial.
Here's a few progress images. (full images tomorrow after the crit :) 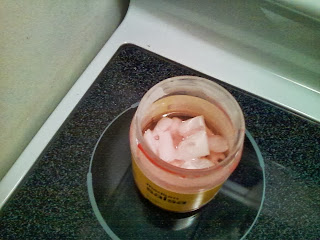 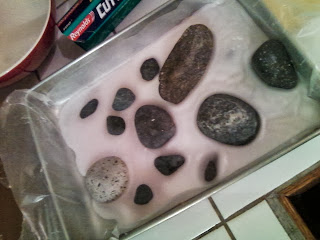 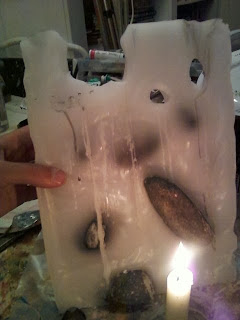 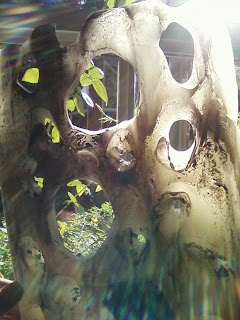