For this assignment, we will not have "subject matter" but instead will start by making a set of intuitive actions with paint on the surface. These marks become the subject matter of the work and will be built upon in subsequent passes. The idea is to get the painting to a level where we think it looks good, then push a little more until it looks awful, and then stop the end of the session. We are then supposed to take a break and then come back to it so that we come to it as a viewer and not as a painter. Then we start the next session . . . for a total of eight (ish) sessions.
With this in mind, I decided to do a little research into the work of Robert Motherwell, one of the leading and articulate abstract expressionist. He uses the surrealist method of automatic drawing, which is the act of using an intuitive and free-association technique to build an image (letting the brush go and do what it wants to) and builds a painting from that. I found this image interesting. 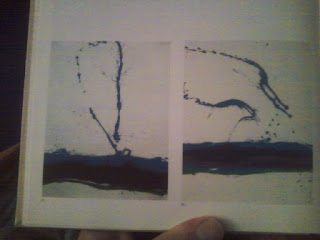 I'm intrigued by these images because these gestures are meant to be read as gestures, but also evoke a certain amount of representation (solar flares in particular) and also a light, airy state of being. I don't think my assignment will be as light and airy . . . but perhaps it would be a good spin on the project? I'd also like to explore the use of cobalt and cool blue in the painting.
I've decided to go with a cardboard support again and acrylic latex house paint. Little did the person in my building who purchased the new patio table and chair set realize that their garbage would be recycled into my assignment lol. I feel like the joke might be on me though as it looks like my cardboard panels are warping a bit. (I applied a PVA (lePage) glue and water mixture to seal up the "raw" side of the cardboard. I'm hoping some gesso on the back will counteract the warpitude!)
Posted by Pete Kohut at 10:38 PM