Several of the people I've had to my studio for visits have all suggested that I take another look at the grid paintings by Mondrian. I've been kind of put off by Mondrian for a couple of reasons: the rigidity, desire for purity and essentialism, autonomy of the picture, and the chauvinistic/sexist discourse around the work. I've also been blaze about his work cuz it seem tight, constrained, confined to the square. But each one of my visitors (profs, art historians, art theorist, and a curator) have all said, "Take another look. Don't worry about what history has done to it. Look at the surface. Look at it again."
And so I did. (below is the piece at the National Gallery of Canada) 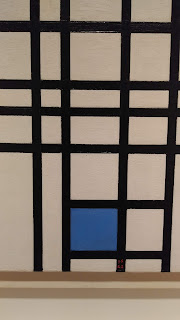 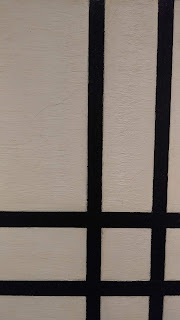 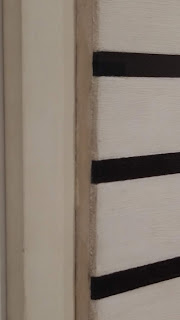 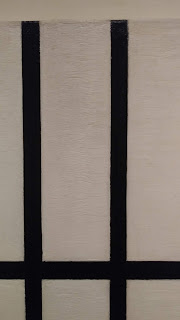 And I'm glad that I did. It may be because I was open to looking anew at the work but immediately I could see the vertical and horizontal movement of the black lines. The strange optical illusion of grey squares in the intersections of the black lines caught my attention because they produced a slow fade instead of buzzing around as they might do in a reversed white/black situation). I noticed that although he must have taped off the lines at some point, the edges were not hard and crisp as I had assumed them to be (like Molinari in the other room) but it seemed as though he must have gone back in with the black and the white several times. The result is a softer edge, like a blur, think Rothko on a much smaller scale. I also noticed how thick the off white paint was (kind of a cool eggshell hue ;) and the stroke of the brush is still visible. So I have to concede the point, there is much more there and I need to dig even further and find out what it is really all about. I will suspend my judgments until then.
On my walk to the studio from the gallery, I noticed the framing of the windows in the old train station downtown. There's the diagonal.
Posted by peet at 4:36 PM