For our next project for the interdisciplinary studio class, we are to created a work that deals with the issue of identity; the self. Identity politics seems to be an issue that is being revisited in our current socio-political climate by artists. As an artist, your art is intrinsically linked to your identity, just at varying scales of importance. So it is difficult to define what the "self" is, but you can't help but express it in your art.
I started off by considering this project in terms of using my self-portrait to explore emotion and psychological spaces of the self. As I started working, I found that it might be more interesting to express the self as fragments because a single portrait can only capture a fraction of a person's character. In order to create a more complete expression of myself, my plan is to create 100 small self-portraits in oils on paper (quick and easy, no fuss no muss) and then edit it down for the final presentation. I'm quite enjoying myself with this work :)
Here are some samples. 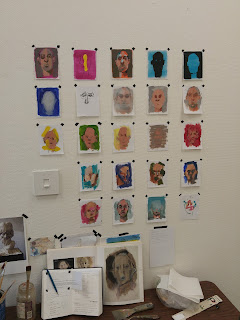 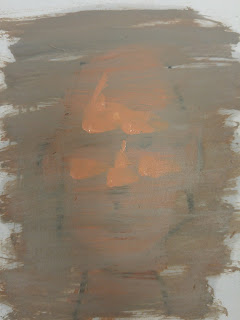 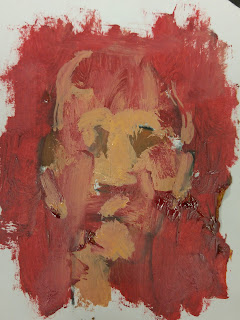 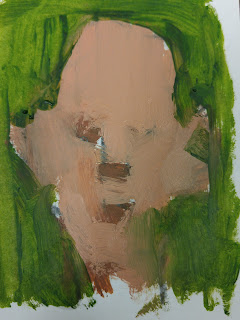 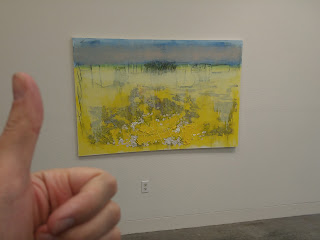 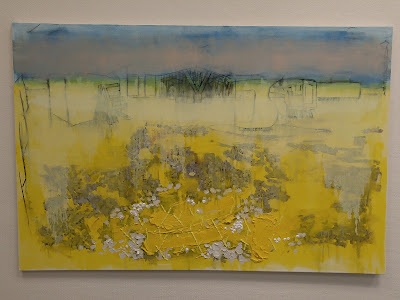 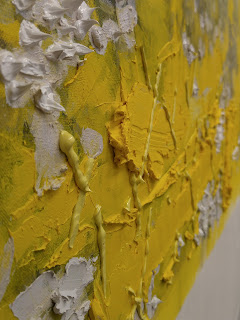 Here's the results of the first assignment. The main critique to the work was that it felt overworked or overconsidered. I can see that now to a certain degree, but I don't think the painting was finished when I had last checked in. I guess something I'll have to remember is that if the painting takes a turn, that means you should make a second painting instead of trying to combine two paintings in one. "Have the courage to know when you've done enough." Below is an early image to compare. 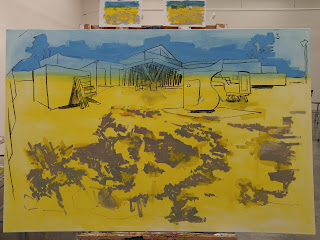 While I was in town for the Bombay Sapphire Artisan Series Finals reception, I went to see the show of Kim Dorland's paintings at Equinox Gallery in Vancouver. The show is titled "Nemophilia." One definition of that word is:

Nemophila species are mainly native to the western United States, though some species are also found in western Canada and Mexico, and in the southeastern United States.
I've been interested in Dorland's work since he had an interview published in Border Crossings magazine a couple of years ago. I was drawn to his subject matter (teenage memories) and his garish use of colour. At the time, thick paint bugged me so I didn't dig that in his work. Fast forward a few years, and however many paintings I've made since then, and now I think that thick paint is almost necessary to convey the idea of paint!
Viewing Dorland's paintings is a confrontational experience. The paintings attack you with their vibrancy (playing with simultaneous contrasts of greys and complements) and their materiality (the paint is literally slathered on in some areas giving the image a precarious feel).
I left the gallery very energized because I want my paintings to do that too! It was just the kind of recharge I needed to start off my school year :) Below are some images. 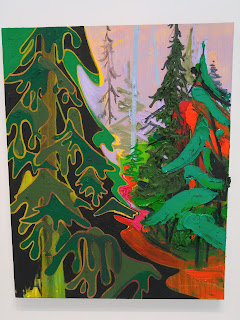 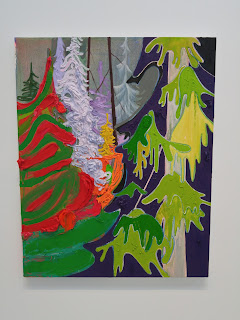 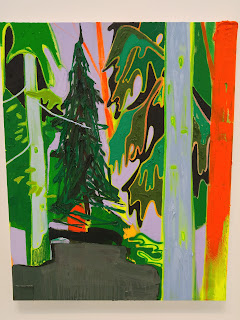 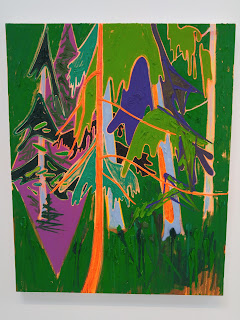 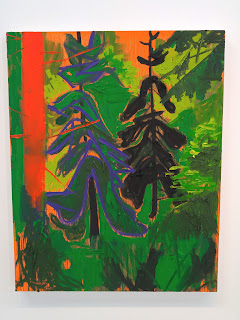 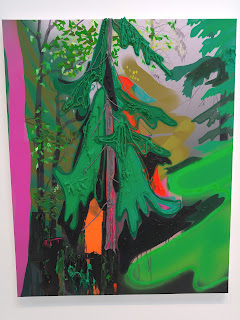 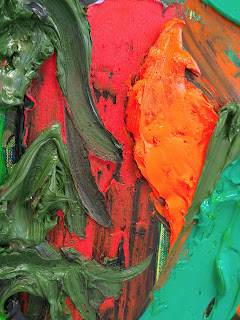 Here's some progress images of my painting of the sculpture yard. When I was out sketching out some studies, I found the space to be really oppressive due to the sun. It was quite uncomfortable. I'm hoping to evoke that feeling of needing to squint because of the harsh sun through the bright yellows and dirty greys (I love what grey does to the other colours on the canvas), using bleeds and layering and letting some of the canvas come through. 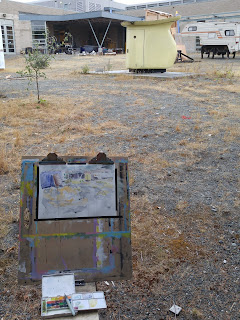 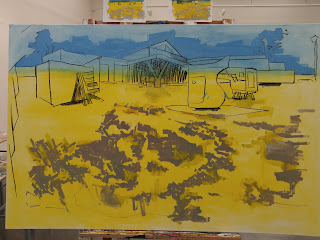 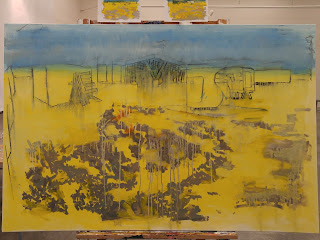 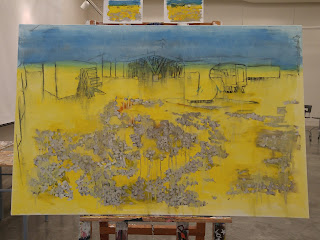 So far so good. Hit a bit of a wall before doing the washes but thanks to some prof input, I got the ball rolling again :)
Posted by peet at 8:45 PM No comments:

Welcome to the future

For my first assignment in Painting with Robert Youds, we are to create a representational painting that deals with the idea of utopia/dystopia in the future. We are to use conventional picture making techniques but that's not limited to traditional landscape type painting. Cubist/multiple perspective space can be used too. The main focus of this assignment is to exercise our pictorial imagination. I think it'll be a good chance to use the retro-future graphics I've admired over the years. 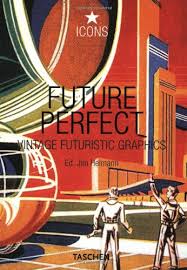 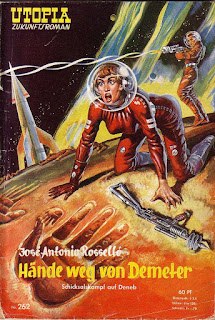 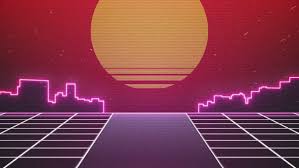 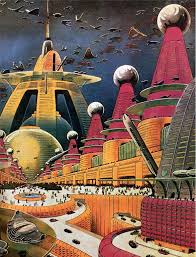 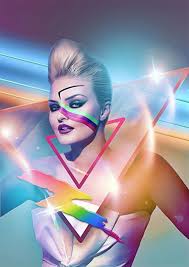 I'm trying to put into words what I am doing with these large partial portraits of men. (bare with me, this might get a bit rambly)
My initial impulse to make these paintings was to try to create something interesting from the smaller studies I had done with graphite on paper. I translated a few of the graphite studies into chalk pastel on paper and was excited with the potential for them to go further: large scale paintings. The concerns I had for the paintings was that I had to be sure that my drawing was sound because I didn't want to use a projector to upscale these. I felt that the last series I had done with the aid of the projector highlighted the flattening of an image. I wanted to try and see if I could work with the distortions inherent in my translating small studies into larger works. Another concern I had was that I wanted to see if I could blend positive and negative space to create a painting. It works so well with drawing that I wanted to see if that would also translate in paint. Ironically, this idea further flattens the image, more than the projector did, but in a much more shocking and interesting way.
* * *
What is the reasoning for my source material? I wanted to use images of men from fashion magazines, because I feel that the concept of masculine beauty is something that I haven't dealt with too deeply in my work. I always gravitate to the female subject. It might be interesting to explore how the portrayal of beauty in these magazines falls short, or how limiting it is. Maybe shallow? Paint is only skin-deep. (good subtitle for the series)
* * *
What's next? How can I take these images to the next level? I might try to exaggerate the compositions so that the topography of the face becomes more apparent. At the same time, I could amp up the gestural quality of the mark-making. I'm going to try some smaller ones before going big again. (cuz I might go art-school sized big when I do them)
Posted by peet at 9:33 PM No comments:

For my multidisciplinary studio class, our first project is to create a response to the space known as the "sculpture yard." It's located just outside the Visual Arts building and acts like a junkyard of sorts for leftover materials and old projects from years past. It is hot and dry in the space with little cover from the sun. Weeds, dirt, and pebbles occupy the yard, a couple of bees buzzing around.
The projects in this class are a handle on which we can define and explore our interests in our preferred discipline and materials. With that in mind, I'm going to respond to this space by making a painting; experiencing the space through a painter's eyes. I did a little sketching and I've decided that my approach will be to create a panorama, using multiple panels (maybe on board instead of canvas because of the harshness of the space, although it might be interesting to have a more poetic response to the space). I want to capture the light and colour of the space and it might be interesting to paint it in several sessions to record the various lighting conditions (and evoke a sense of time passing).